Alrighty folks, it’s time again to get back on the reviewing train and make some progress through these waxes I’ve had sitting around for a while.

Firehouse Wacky Tacky was one of the first waxes I tried and I instantly fell in love with it so I was more than excited to have the chance to review another one of their products. When I contacted them about ordering a new tin of the Wacky Tacky they were kind enough to include a tin of their Dark wax so I could give it a review.

Like I said in my first review of Firehouse, they have three different waxes; Light, Dark, and Wacky Tacky.. When I received my tin of Dark I wasn’t expecting much different from the WT based on the pictures off the website.

WELL I was right, when I opened the tin of Dark I saw a familiar color wax and got a whiff of what I feel is the exact same natural scent. I know I was very vague in my WT review about the scent, but now that I’ve had more time with the waxes, I would say the scent of this stuff is a wood, fire, toasty scent. Now it’s not over powering, but It smells quite nice!

The Dark Wax, As you can tell it’s almost the same color of the WT

When I said I was right about the waxes being not too different I was almost completely right. When you think of Wacky Tacky you think of a sticky, tackier wax, and that’s what you get with WT. With the Dark, I was expecting almost the same wax, just without the stickiness of the WT… AND I was right! The Dark wax is a lighter, less sticky version of the Wacky Tacky.

As for the hold, I will reaffirm that this stuff is a lighter/less sticky version of the WT. It held my curls well throughout the day, but I did notice that when I was out in the hot car I started to get a little droopage, but with a little blast of the A/C I was able to adjust the curls back into place and set things up a bit.

Now I know this is a short review, but I think I’ve said all I need to say about this… It’s lighter and less sticky than Wacky Tacky. Almost the same color (WT is darker) and the exact same scent.

Look!! See I told you the Dark was lighter than the WT… 🙂 (The Dark is on the left)

Overall I think Firehouse has another great wax on their hands, I think I will use this one more during the winter when it cools off, or for days when I want to loosen things up in my ‘stache. I think this wax would be good for those of you who are just starting to experiment with waxes, It’s got a good amount of hold, but it’s very easy to work with. At the same price of the WT (and ALL Firehouse waxes) a 1oz tin of this stuff goes for $8, and with shipping to the U.S for $3 (which went up from when I reviewed WT) I would say head over to their site and pick yourself up a tin or two of ALL Firehouse waxes!

Thanks again to John and Kristine from Firehouse for their fantastic Customer Service!

Firehouse Moustache Wax is a pretty well-known brand, I’ve already found tons of reviews on this wax (as it seems EVERYONE recommends it). Firehouse makes three different waxes; Light, Dark, and Wacky Tacky.

The Dark wax is supposedly a little bit lighter color wax then the Wacky Tacky. Also I have read that the wax itself its a softer wax then the WT as well*. (*Have not tried it so don’t hold me to that)

And last but not least, the Wacky Tacky!! This is their darkest and firmest* (*Just what I’ve been told) wax.

OK enough with the other waxes, let’s get to the review of the Wacky Tacky

When you first open the tin you see that this wax is pretty dark, Not black by any means but it is a dark chocolate color. After holding it up and taking a nice big smell you get a natural sent(Hard for me to put a finger on what the exact smell is but it is quite pleasant) -although some have said they don’t like the smell I don’t mind it to much- and by no means is this smell overpowering. Just a slight hint which you’ll catch a whiff of every once in a while throughout the day. 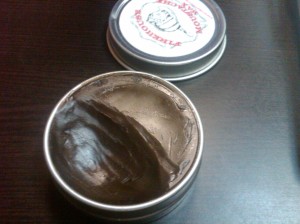 As you can see I have used quite a lot so far! It is my everyday wax so I have used it for a while. The color almost matches the dark brown table. So yes this stuff is real dark!

Let me tell you this stuff is flipping stiff! the first time I used it I didn’t heat it up in any sort of way (which is recommended by their website,) I had a real tough time trying to get it into the ‘tache! So I would indeed say warm it up first, throw it in your pocket for a couple of minutes or give it a quick blast with a hair dryer (only about 30 sec but probably a little less.) After heating it up a little bit this wax becomes easier to work into your ‘stache.

Styling it into curls(or whatever you may choose) is quite simple with this stuff when it is softened up a bit. Just a quick twist of the fingers and it should stay almost exactly where you put it for most of the day!-The only reason I say most of the day is because throughout the day the center of my ‘stache falls into “fangs” and the curls sag a little -This may be because I am not using enough or I am just not combing it through well enough. Or because of the 115 degree heat during the Arizona summer… But a quick touch up on the center and reshaping the curls fixes that! Plus it only happens about once a day. And there is no need for me to reapply any wax, just fix it with the wax that is already there! This wax stays stiff but not rock solid, it is still workable while in the ‘stache. Washing this stuff out is relatively easy, it comes out when I wash my face in the shower each morning (which is fine by me because I’m not sure I want yesterdays wax on today’s ‘stache).

Overall I would say that Firehouse Wacky Tacky is a fantastic wax! it has become my day-to-day wax, (so I have been using it for longer than a week already) and it has yet to disappoint me.  I think everyone should have a tin of WT in their wax collection, and at $8.00 a tin and $2.00 for US shipping it is reasonably priced!

To order Firehouse Moustache Wax go check out their website