Again, This is another long overdue review….

This is a wax that I’ve been really excited to review, mainly because of the scent!! -But we’ll get to that in a little bit.

True Wax -For The True Man. Well That’s exactly what this wax is, It’s for the true man! -Again we’ll get to that later.

Opening up the package you see the bright red label with an old timey boxer with a fantastic handle bar moustache. The 1oz tin has a nice pop to it that makes it stick out from the other white labeled tins.

I dig the red label with the fantastically handlebared boxer on it.

Opening the tin you see a yellow whitish wax, and you get smacked in the face by the clove scent. Yes this wax smells like cloves. Now I know I’ve said it before but I love the smell of clove, it reminds me of my childhood at christmas time so whats not to like… Well one thing, it is a little overpowering while in the tin, BUT it all changes when applied to the ‘stache. The scent dies down to a nice small clove aroma. 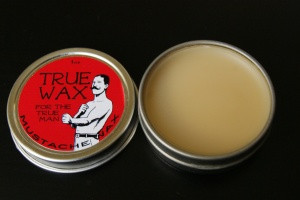 Alright, This is what I was talking about when I said It’s really for the “true man.” Although on their Facebook the guys from True Wax say that their wax is a Medium-Hard wax. Well I only kind of agree with that. While in the tin this stuff is REAL stiff, I would not recommend trying to apply this stuff without using a hair dryer to first warm it up. The best way I found was to scrape a ball out and use the hair dryer on low while rolling it between my fingers. I found that this helps evenly warm up the wax, making it easier to apply it without pulling any hairs out. Once in the ‘stache this wax is very easy to style into curls. Once the wax is styled it stays there throughout the day without much drooping. BUT it does not harden like other stiff waxes, which is why I agree with the Medium-Hard wax.

One down side to that I had with this wax (that I’ve also had with other white waxes) is that late in the day, after eating, drinking, and a lot of natural movement of the ‘stache. I did experience some flaking. I was usually able to fix it by readjusting my ‘stache, but it was still something that I had to keep an eye out for.

Overall I liked this wax A LOT, I love the clove scent, although some have said it’s too strong, I felt it was just right. It was definitely tough to get out of the tin and warmed up, but once warmed it was great in the ‘stache and it stayed in place throughout the entire day. I must send a huge thanks to Trevor and Joshua from True Wax. If you’re at all interested in this wax (which I HIGHLY suggest) then head on over to their site and grab yourself a tin of their wax. At $15 for a (shipped) 1oz tin of wax, this wax is right on with every other wax for price!

One thought on “True Wax”